Fifty years ago this year, the Austin Gem and Mineral Society was formed. As part of the celebration of our anniversary a series of articles will appear in the Stone Chipper. This is the first of that series.

Before AGMS was formed, Austinites were active in the state association. The Texas Rockhound Association was formed in 1946 in San Angelo. In 1947 at the Annual Meeting and Show in the Plaza Hotel in San Antonio, J. J. Brown of Austin was elected President. The affiliation with the Rocky Mountain Federation of Mineral Societies was begun. The Austin connection continued in 1948 with the Annual Meeting and Show being held in the Mezzanine Floor of the Driskell Hotel. J. J. Brown was re-elected President and Mildred K. Spillmann of Austin was appointed Secretary-Treasurer. Then back to the Plaza Hotel in San Antonio in 1949 with Mr. Brown re-elected as President and Mrs. Spillmann re-appointed Secretary-Treasurer. The preceding summary was taken from an article written by Fran Ellis for the July – August 1999 issue of the SCFMS Newsletter. 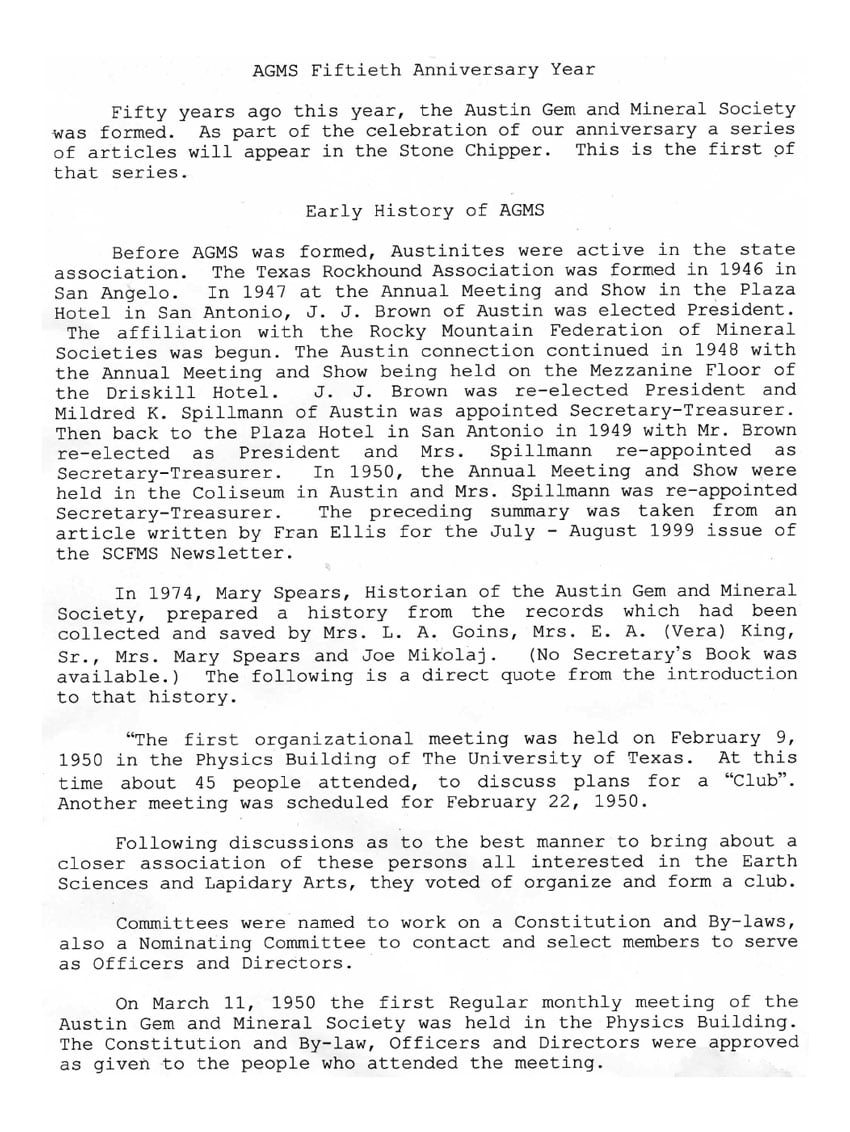 In 1974, Mary Spears, Historian of the Austin Gem and Mineral Society, prepared a history for the records which had been collected and saved by Mrs. L. A. Goins, Mrs. E. A. (Vera) King, Sr., Mrs. Mary Spears and Joe Mikolaj. (No Secretary’s Book was available.) The following is a direct quote from the introduction to that history.

“The first organizational meeting was held on February 9, 1950 in the Physics Building of The University of Texas. At this time about 45 people attended, to discuss plans for a “Club”. Another meeting was scheduled for February 22, 1950.

Following discussion as to the best manner to bring about a closer association of these persons all interested in the Earth Sciences and Lapidary Arts, they voted to organize and form a club.

Committees were named to work on a Constitution and By-laws, also a Nomination Committee to contact and select members to server as Officers and Directors.

On March 11, 1950 the first Regular monthly meeting of the Austin Gem and Mineral Society was held in the Physics Building. The Constitution and By-law, Officers and Directors were approved as given to the people who attended the meeting.

There were seventy-five Charter Members, (all who joined in the first three months) and at the end of the year had been an additional 45 regular members.

To encourage the study of Rocks, Minerals, Collecting and the Lapidary Arts, an Annual Show was held each year beginning in 1950. This was an Educational non-competitive Show, which was received enthusiastically by the people of Austin, especially the school Children.”

The review of the historical materials reveals that the first year was busy, in addition to forming the organization, they had programs on Llano Minerals, Rocks and Rock forming Minerals and Occurrences of Valuable Minerals, and Quartz Family Minerals. They also had a feature during the meetings called “Bragging Minerals and Bragging Rocks”. The field trips during the first year were to Laredo for agate, Flatonia for opalized and agitated wood, Llano County for rose quartz and tourmaline and a trip into Mexico near Zapata to hunt agate. A sample of their meetings is the August meeting that was held in the Rock Garden at Zilker Park. The members were to bring mineral specimens for the club collection and/or for the auction. They set up tables for swapping. The December meeting was held in the Calcasieu Auditorium with the election of officers, music, refreshments and a gift “rock” exchange.

After reviewing the history that was available in our field, Tommie Potts and I visited with Mary Spears, the only Charter member living in Austin. Her eyes would light up as she told us about the fun she had going on the field trips. Once while being down near the Mexican border, they were approached by the Border Patrol. It seems that the Border Patrol were looking for some “dangerous characters” that may be in the area. The club members didn’t know what to do so they just went on looking for rocks. Mary liked to collect mineral specimens and to cut rocks open to see “what’s in them.” Mary also told us about having taken the neighbor boy to one of the meetings. Her husband, Lewis Spears, was to pick them up after the meeting. Well, in came one of the members and invited everyone to his house for ice cream. So everyone except Mary and the neighbor boy went for ice cream. They were left waiting on the steps for Lewis. The ice cream was provided by Chester Brooks who owned Quality Check Ice Cream Co. I bet that wasn’t the last time that ice cream was the refreshment.

After visiting with Mary, I began wondering how they had gotten 45 people interested in rocks, minerals, gems, etc. together for that first meeting. So, I called Mary to ask my nagging question. Many of the people that attended the first meeting were connect to the University of Texas as professors, students, employee, or people that had visited to ask earth science questions. So the method of getting the word out about the possible organization was by word of mouth.

One of the things that I did notice when I reviewed the list of people at that organizational meeting was the names of the authors of the first edition of “Gem Trails of Texas”, Bessie and Harry Simpson. Current AGMS members that attended the organizational meeting are Mary Spears of Austin, Dr. Stephen Clabaugh of Spicewood, and W. N. Alexander of Mission.