Many people interest in “rock” attended the Texas Federation Show in 1948, and were quite impressed with the excellent exhibits at the Driskill Hotel. Some joined the State Society, but others began to hope for a local club to be formed. After many suggestions at coffee sessions and impromptu field trips, some of the more experienced quit talking and started acting. Fortunately, the University of Texas Geology Professors were willing to give their advice, and with the experience of J. J. Brown, Emil and Mildred Spillmann, Bill and Ione Odom, and many others, our Austin Gem and Mineral Society was born.

The first organization meeting was held in February, 9, 1950 in the Physics Building at the University of Texas. At this time, about 45 people attended to discuss plans or a “club”. Another planning meeting was held on February 22, 1950. Decisions were made to include all persons interested in the Earth Sciences and the Lapidary Arts. Committees were named to work on the Constitution and Bylaws, and also a nominating committee to contact and select members to serve as Officers and Directors. 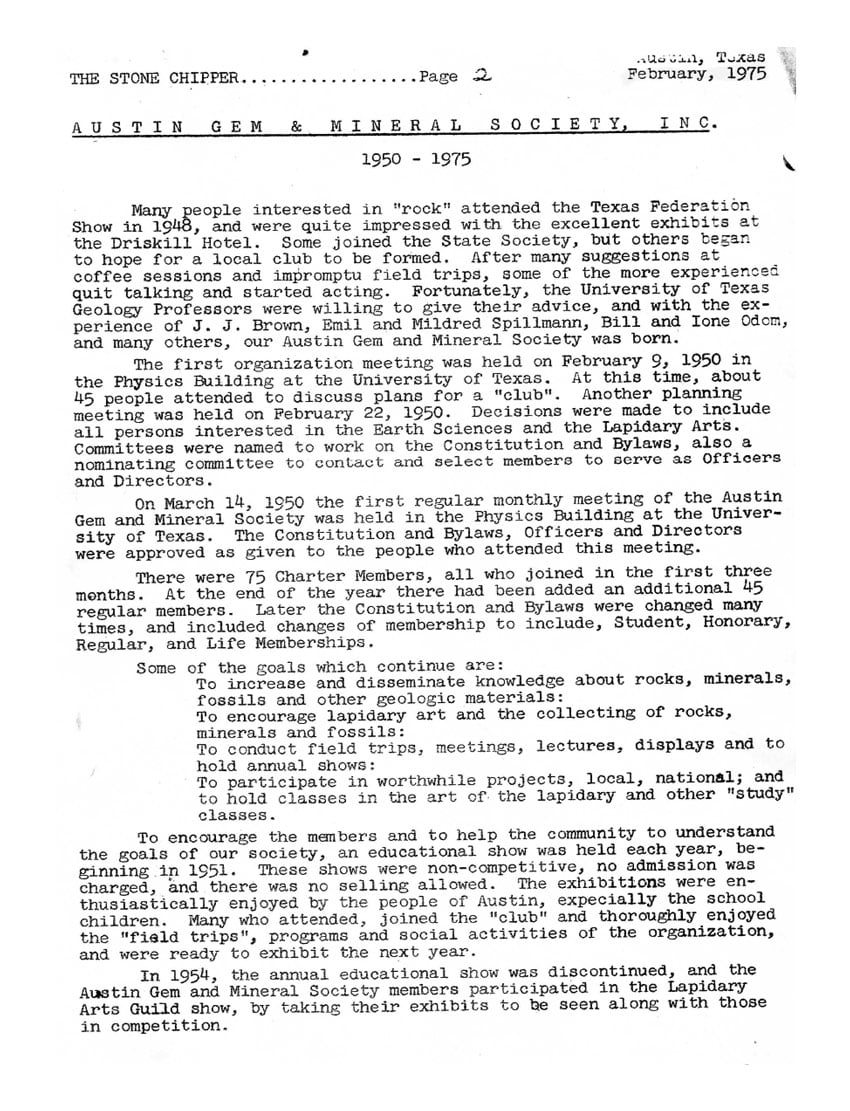 On March 14, 1950 the first regular monthly meeting of the Austin Gem and Mineral Society was held in the Physics Building at the University of Texas. The Constitution and Bylaws, Officers and Directors were approved as given to the people who attended this meeting.

There were 75 Charter Members, all who joined in the first three months. At the end of the year there had been added an additional 45 regular members. Later the Constitution and Bylaws were changed many times, and included changes of membership to include, Student, Honorary, Regular, and Life Memberships.

Some of the goals which continue are:

To encourage the members and to help the community to understand the goals of our society, an educational show was held each year, beginning in 1951. These shows were non-competitive, no admission was charged, and there was no selling allowed. The exhibitions were enthusiastically enjoyed by the people of Austin, especially the school children. Many who attended, joined the “club” and thoroughly enjoyed the “field trips”, programs and social activities of the organization, and were ready to exhibit the next year.

In 1954, the annual educational show was discontinued, and the Austin Gem and Mineral Society members participated in the Lapidary Arts Guild show, by taking they exhibits to be seen along with those in competition.

In 1965, the officers and members of the Austin Gem and Mineral Society and The Lapidary Arts Guild, Inc. decided after many long discussions to become one club. So, in January 1966 the Austin Gem and Mineral Society absorbed The Lapidary Arts Guild and by doing so became members of the Texas Federation of Mineral Societies. This enabled the members to have competitive shows. These annual shows have been quite successful and continue to be of interest to the general public in Austin and surrounding towns.

The Junior members decided in 1966 to formally organize and named their Junior Club “The Bo’lder Grabbers”. They have their own meetings, programs and social activities. The exhibit in shows, assist in the Natural Science Center annual “Safari”, etc. Mrs. Doris Riedel was the first sponsor names. The yearly activities have depended on the number of Junior members who join the Austin Gem and Mineral Society. Many have won awards for their exhibits.

The Austin Gem and Mineral Society Incorporated in 1969.

Through the past 25 years the Society has a record of accomplishments that we can all be proud of. Many members have been teaching Geology at the Natural Science Center, others have aided the Boy Scouts to show their collection. Other Civic Organizations have asked for members to explain our “hobby”. Lapidary classes have been taught, with students becoming teachers to pass their skills on. The Society has awarded the ALL AMERICAN FEDERATION CLUB AWARD for 1968 – 1969, and is in the running for the 1974 award.

It is impossible to tell of the many activities of various member throughout the 25 years which made our Society grow. Every President, regardless of profession has to depend on the membership to take care of the minutes and the important jobs. We have on record the names of the many Committees Chairmen and the members of the committees, and hope that every member will feel proud to have been a part of the AUSTIN GEM AND MINERAL SOCIETY.